Application of the plate type condenser

The stroke of the two fluids that plate type condenser in the plate cooler is called the shell pass. The wall surface of the tube bundle is the heat transfer surface. In order to increase the heat transfer coefficient of the fluid outside the tube, a certain number of transverse baffles are usually installed in the shell, which also forces the fluid to flow through the tube bundle multiple times in a prescribed path, which greatly increases the degree of turbulence. Commonly used baffles are round and disc-shaped. 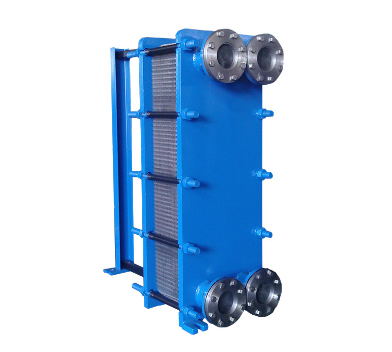 The former is more widely used. In order to increase the speed of the fluid in the tube, appropriate partitions can be set in the heads at both ends. In order to increase the flow rate outside the tube, a longitudinal baffle can be installed in the shell to allow the fluid to pass through the shell space multiple times. In the tube heat exchanger, because the temperature of the fluid inside and outside the tube is different, the temperature of the shell and the tube bundle are also different. The shell is provided with a tube bundle. The two ends of the tube bundle are welded, expanded or welded together to fix the tube on the tube plate. The outer periphery of the tube plate is bolted to the head flange, and the temperature difference stress exists after the tube bundle is manufactured. . When there is a large temperature difference between the heat exchange tube and the shell, an expansion joint should also be provided on the shell.

There are many controls on the cooler, and it is a cooling device that uses ambient air as a cooling medium to cool or condense the high-temperature fluid in the tube. It can be used as a cooler or condenser, and it uses air as a coolant to achieve the intended use intention and use effect through the use of this device. If the plate cooler is used correctly and reasonably, good results can be obtained and the product can play its due effect and function.