For sensible (single-phase) heat transfer, the duty can be represented by:

Effective heat transfer area in a PHE, A, is calculated by multiplying the total number of plates in the exchanger minus two, by the effective area per plate.

Two plates are subtracted from the total number in determining the area since the first and last plates have fluid only on one side; they are noneffective in transferring heat.

Corrugated plates, when placed in an exchanger, form a three-dimensional flow path with a nominal gap twice the pressing depth of the plate. The nominal gap or channel spacing often

defined as the mean hydraulic diameter, Dh , ranges from 0.2 to 0.4 in. (5 to 10 mm). To estimate average film coefficients in PHEs for fully developed turbulent flow of Newtonian fluids, the following relationship is widely used. 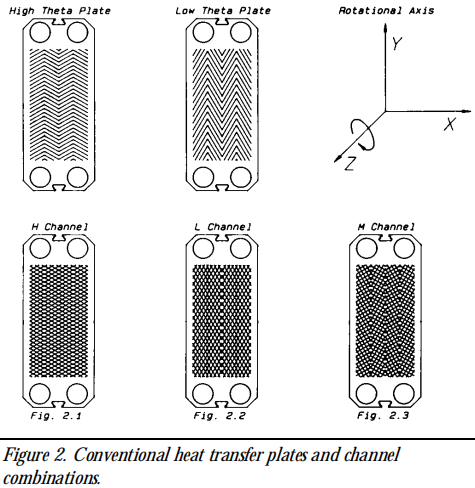 Thermal length is a dimensionless number that allows the design engineer to relate the performance characteristics of a channel geometry to those of a duty requirement. The thermal length of a channel describes the ability of the channel to affect a temperature change based on the log mean temperature difference (LMTD).

• Match the characteristic of the channel, thus the exchanger is optimally sized utilizing all the available pressure drop with no overdimensioning.

• Exceed what is achievable by the channel at the allowable pressure drop, requiring that more plates be added and pressure drop reduced by lowering the velocity. Such a design is termed thermally controlled.

• Be less than that achievable by the channel at the allowable pressure drop. This results in a greater temperature change across the plate than required, or overdimensioning. Such a design is termed pressure drop controlled. To have the most economical and efficient exchanger it is critical to choose, for each fluid, a channel geometry that matches the thermal length requirement of each fluid. Since thermal length achievable by a channel depends on the physical properties of the fluid, correction factors must be considered when the fluid’s physical properties differ from those for water (2), which are used in this article.

Today’s conventional heat transfer plate designs are classified as chevron or herringbone type, with the corrugations forming a series of patterns. Each plate size is pressed with two different chevron angles, Figure 2, the low theta plate and high theta plate, and have acute and obtuse apex angles, respectively.

The gasket groove on these conventional-style plates is recessed 100%, Figure 3, so that there is always a front and back to each plate. By having the gasket groove recessed 100%, the plates can only be rotated about the Z axis. The channels are formed by alternately rotating adjacent plates 180° about their Z axis so that the arrow heads of the chevron angles point in the opposite direction. When two plates are adjacent to each other, the thermal and pressure drop characteristics of that channel depend strongly on the angle at which corrugations cross each other. With two different patterns, low and high theta, three distinctly different channels can be formed, each having their own hydrodynamic characteristics.

• H Channel. Two plates with obtuse angles and high theta are placed together forming a high-theta channel, characterized by high pressure drop and high temperature changes across the plate, Figure 2.1.

• L Channel. Two plates with acute angles and low theta are placed together forming a low-theta channel, characterized by low pressure drop and modest temperature changes across the plate, Figure 2.2.

• M Channel. Combining one high-theta plate and one lowtheta plate to form a medium-theta channel, having characteristics that fall somewhere between those of an H and L channel, Figure 2.3.

Within a conventional plate pack, there can also be a mixing of high- and low-theta channels for pressure drop optimization. Despite the ability to mix channels, conventional plate heat exchangers have the major shortcoming that both fluids are subject to identical channel geometries since the channels are symmetrical. This symmetrical geometry is very effective when both fluids have the same thermal length requirement and pressure drop, but this is rarely the case today. Typical applications in today’s marketplace involve unequal flow rates with varying thermal length requirements for the hot and cold fluids. When the duties are such, both fluids can never be totally optimized with symmetrical channels, and the exchanger will not be the most economical possible.

By conventional standards, this would be considered an acceptable design. Since the hot-side pressure drop is not totally utilized, however, design is controlled by cold-side thermal requirement. Therefore, this is not the most economical design if both fluids could be individually optimized. If asymmetrical channels were available, the plate pack could be designed such that the hot-side channels would have a higher thermal length than those of the cold side. By doing this, both fluids would be individually optimized , making full use of both available pressure drops. Since the increased turbulence would increase the hot-side film coefficient, the area could be reduced below 185 ft 2 (17 m2 ) calculated in this example. 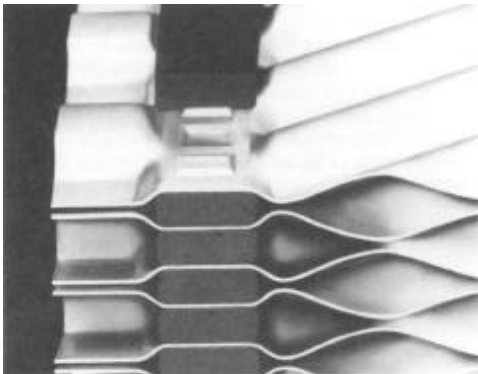 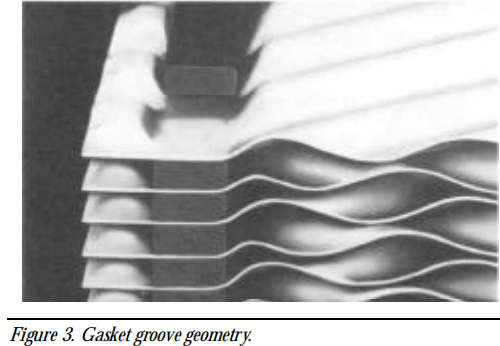 While the conventional heat transfer plate has a homogeneous corrugation pattern, the asymmetrical plate has heat transfer section divided into four quadrants, with two different angles, B1 and B2, Figure 4. The asymmetrical plate utilizes a patented invention that permits the gasket groove to be positioned in the neutral plane of the plate, recessed 50%, Figure 3.2. With the gasket groove in the neutral plane, now the distance between adjacent plates’ gasket surface and the gasket groove will always be the same regardless of the rotation of the plate. Conventional plates, with gasket groove 100% recessed, can only rotate about one axis, the Z axis. 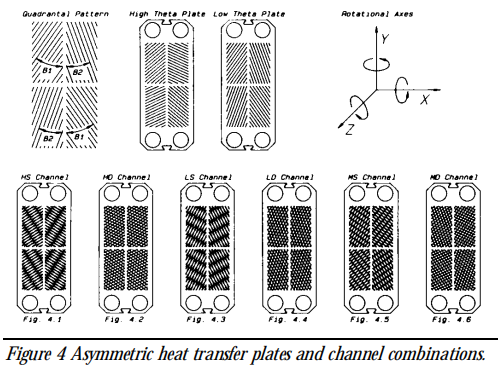 Asymmetrical heat transfer plates are available with a high- or low - theta pattern. With these two patterns and the additional rotational degrees of freedom, it is possible to have six different channel geometries. This is double that available in conventional PH E s .

in the opposite direction, Figure 4.2.

the opposite direction, Figure 4.4.

MS Channel. Combining a high- and low-theta plate with arrow

heads in the same direction, Figure 4.5.

MD Channel. Combining a high- and low-theta plate with arrowheads in the opposite direction, Figure 4.6.

Three of the channel geometries are identical to those available with conventional plates, channels HD, LD and MD are identical to conventional H, L and M channels. Three new channels formed with arrowheads in the same direction have increased thermal efficiency in comparison to their counterparts with arrowheads in the opposite direction. This increase in efficiency is a result of increased turbulence of the process fluids. To form the asymmetrical channels within the plate pack, the plates are systematically rotated to achieve the desired combination of S and D channels, matching the thermal length required for each fluid.

The ability to rotate the plates relative to each other enables the design engineer to independently optimize the channel for the hot and cold fluids, matching the required thermal lengths for each fluid with that achievable by the grouping. This allows thermal duties with different hot- and cold-side thermal length requirements to be effectively handled by a PHE, no longer having exchanger designs controlled by one side or the other. The benefits of asymmetrical groupings are illustrated below, where the same conditions are used as in the previous example for conventional plates. 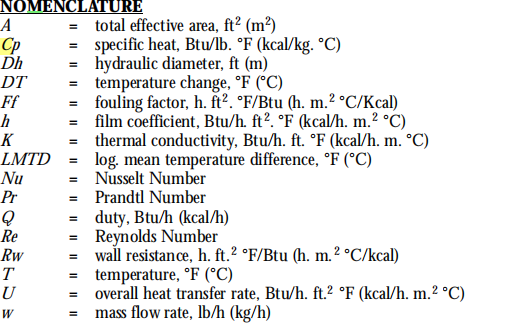 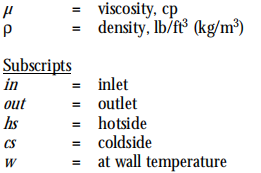