The difference between tube condenser and baffle condenser

The baffle, as the name implies, is a plate used to change the direction of fluid flow. It is often used in shell-and-tube heat exchangers to design shell-side medium flow channels. The number of baffles is determined according to the nature and flow of the medium and the size of the heat exchanger.

The baffle is a part of the tube heat exchanger that can be used to improve the heat transfer coefficient and support the tube bundle; but because of its simple structure, it is often ignored by designers. The actual situation can prove that the structure of the equipment baffle, whether designed by our country or imported from abroad, is often varied, some of which are complicated to manufacture and are not conducive to improving the heat transfer coefficient.

The reason is that the designer did not carefully analyze it according to the specific heat transfer properties before determining the specific structure and size. This article intends to list the advantages and disadvantages of various types of baffles one by one and compare them, and put forward what kind of baffles are suitable for the different points of the following tube condensers and baffled condensers under what circumstances. Discuss personal opinions with relevant comrades.

The fluid in these dead zones is almost stagnant, so its heat transfer area is not fully utilized. However, there is basically no dead zone in the tube bundle of the baffle rod heat exchanger, which makes full use of the heat transfer area; in addition, after the fluid passes through the baffle rod (round rod), the vortex (called Kaman vortex street), and when the fluid flows through the baffle grid, the flow cross section is reduced, and then expanded, resulting in the Venturi effect.

These baffles have their own advantages and disadvantages, which are explained one by one as follows:

Most heat exchangers use bow baffles. The arrangement of the bow-shaped baffles in the shell side is arranged in the up and down direction to cause violent disturbance of the liquid to increase the heat transfer coefficient; the arrangement in the left and right direction is mostly used in horizontal heat exchangers, and the equipment is accompanied by The gas phase is absorbed and condensed to facilitate the flow of condensate and gas. When the tubes are arranged in a square shape, in order to form turbulent flow of the medium to improve the heat exchange effect, corner cuts are used.

The single arc baffle is mainly to improve the degree of cross-flow of the overall shell side. The percentage of cuts is generally 20%~49%; usually 20%~25%, the best size is 20%, and the unit pressure drop is lower The heat transfer film coefficient is the highest, less than 20% (except where the tube is not arranged at the gap), and the pressure drop is large; the incision exceeds 20%, resulting in the formation of a stagnant zone for the fluid flow rate. If the incision is too large or too small, the heat transfer performance of the tube bundle will be reduced; In order to reduce the vibration, it is also possible to use no pipes at the gap. The gap can be reduced to about 15% or 25%, and the pressure drop is only about 1/3 of the single bow. Double-bow baffle: When the single-bow resistance is too high, it can be changed to double-bow baffle.

The double-bow baffle can divide the flow section passing through the shell side into two streams, so as to reduce the pressure drop, reduce the baffle spacing, and reduce the degree of cross flow. It is characterized by a larger open area, allowing The flow is almost parallel to the pipe, so the probability of flow induced vibration is small. The multi-bow baffle retains the advantages of a single bow, and some sizes of multi-bow can make the fluid flow and the pipe close to parallel, lower the pressure drop, and reduce the possibility of vibration. The double-bow and triple-bow baffles can make good contact between the two heat exchange media and eliminate dead corners of the heat exchanger to improve heat exchange purposes. They are generally used in large diameter and large flow occasions.

The disc-circular baffle is composed of a large-diameter open circular plate (also called a ring plate) and a small-diameter disc plate in a staggered arrangement. The characteristic of the medium flow is that it is symmetrical to the axis, and the flow is mostly parallel to the tube bundle. Therefore, the flow resistance is smaller than that of a single arc baffle, and the vibration caused by the cross flow perpendicular to the tube is smaller, but the shell side heat transfer film The coefficient increase is smaller than that of a single bow.

Disc-circular baffles are generally used for large diameter and large flow occasions. Practice has proved that the shell side of the baffle rod heat exchanger is not easy to scale, and the cleaning cycle can be greatly extended. This is because: the aforementioned venturi effect and card vortex effect produced when the fluid flows through the baffle grid and the baffle rod make the fluid form a strong erosion of the pipe wall, so the dirt is not easy to deposit on the pipe wall And because of the parallel flow, the flow path is relatively smooth and there is no dead zone. On the one hand, it makes it difficult to deposit dirt. On the other hand, if the dirt deposits more, it will be easily washed away by the fluid, so it has a certain self-purification effect. 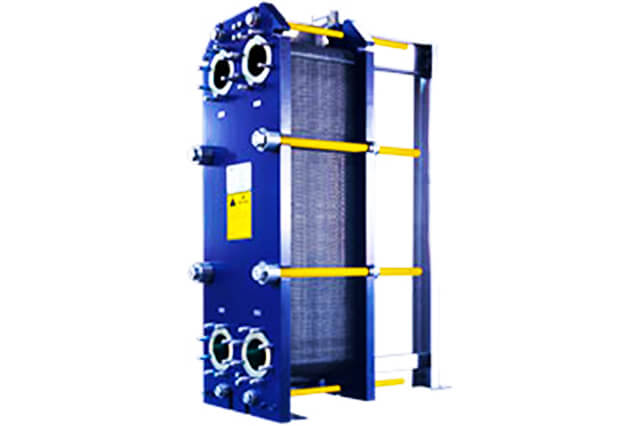