The working principle of the condenser

Condenser, a component of the refrigeration system, is a type of heat exchanger, which can convert gas or vapor into liquid, and transfer the heat in the tube to the air near the tube in a very fast manner. The working process of the condenser is an exothermic process, so the condenser temperature is relatively high. 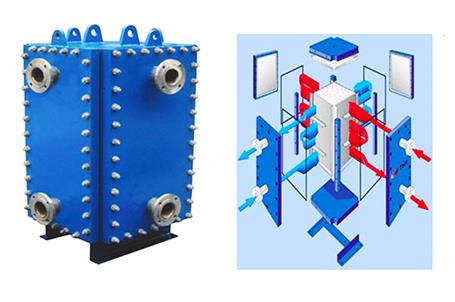 Power plants use many condensers to condense the steam discharged from the turbine. Condensers are used in refrigeration plants to condense refrigerant vapors such as ammonia and freon.

In the petrochemical industry, condensers are used to condense hydrocarbons and other chemical vapors. In the distillation process, the device that converts vapor to liquid is also called a condenser. All condensers operate by taking away the heat of gas or steam. The gas passes through a long tube (usually coiled into a solenoid), allowing heat to be lost to the surrounding air. Metals such as copper have strong thermal conductivity and are often used to transport steam. In order to improve the efficiency of the condenser, fins with excellent thermal conductivity are often added to the pipeline to increase the heat dissipation area to accelerate the heat dissipation, and the fan speeds up the air convection to take away the heat.

The single-stage vapor compression refrigeration system is composed of four basic components: a refrigeration compressor, a condenser, a throttle valve and an evaporator.They are connected in sequence by pipes to form a closed system in which the refrigerant circulates continuously. It flows, changes its state, and exchanges heat with the outside world.